Skip to content
Kanulu Kanulanu Dhochaayante Netflix OTT Digital Premiere Date: The film was a huge box office success and received great applause from audience. It’s been over a month since the release of Dulquer Salman’s film, and now there have been reports of a film premiere online. Netflix India has reportedly acquired the film’s digital rights. The latest reports have revealed that the Telugu version of the film will be released on April 17. The film was very successful in theaters. So, those who have missed watching the film in theaters can watch the film Online in HD on the Netflix India OTT platform. 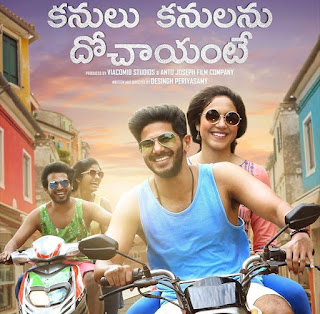 Most awaited film of Dulquer Salmaan in Telugu, Kanulu Kanulanu Dhochayaante will be live online from 17th April on Netflix India. As we all know, The movie has many prominent actors from multi languages like Dulquer Salmaan, Ritu Varma, Rakshan, Niranjani Ahathian, Goutham Vasudev Menon and others.The Tamil version is titled as Kannum Kannum Kollaiyadithaal.