Skip to content
K Viswanath Garu is a Telugu film director who is well known in India after many Blockbuster movies. Moreover, He is a recipient of five National Film Awards, six state Nandi Awards and other annual film awards for his work in Indian films especially Telugu. In 1992, he received the Raghupathi Venkaiah Prize from the State of Andhra Pradesh and the civilian Shri Padma Shri for his contributions to art. Received the Dadasaheb Phalke Award 2017, the highest distinction of Indian cinema at the 64th National Film Awards. 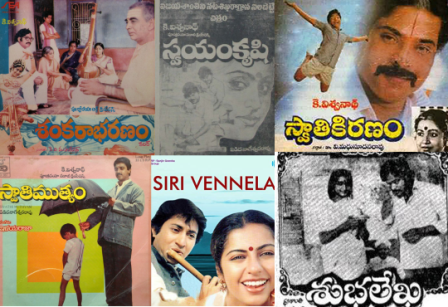 In most of his movies, he used to highlight various Art works like Traditional music, Dance, Painting, Singing, etc. K Vishwanath last film is “Subhapradam” with Allari Naresh. If you are check for his best films in Tollywood, then check the below list.

Most of the films in K Viswanath Garu’s film career starts with letter “S”. Viswanath has received National Awards for various Telugu films like Sankarabharanam, Saptapadi, Swati Mutyam, Sutradharulu, Swarabhishekam. To honor his service for Indian cinema, Indian govt has honoured him with Dadasaheb Phalke Award.

Kasinadhuni Viswanath was born on 19th Feb, 1930 in a family belonging to Repalle Thaluka, Guntur district of Andhra Pradesh. K Viswanath Garu is not only a director. He was also into various crafts of Cinema like Actor, Audiographer, Screenwriter, etc.

K.S Viswanath has done movies with Megastars of South Indian Cinema like Chiranjeevi, Kamal Hassan, Mammootty, Venkatesh and others. For his works in Telugu cinema, Telugu audience has given him a screen name called “Kalathapasvi Viswanath”. Recently, the film “శంకరాభరణం” has completed 40 years of Telugu cinema. To remember this, A function has been conducted at Hyderabad to facilitate the director “K Viswanath”.