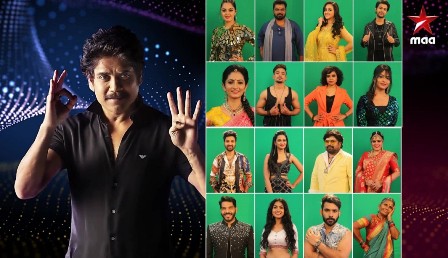 You may like: bigg boss telugu season 6 online voting

In the last seasons, Bigg Boss Telugu hosted by four popular Telugu actors viz. Jr NTR, Nani, Nagarjuna and Ramya Krishna. Now, the Season 4 is again going to host by Nagarjuna. The Star Maa TV channel will be officially telecasting the Bigg Boss Telugu season 4 from 30th August. The details will be out soon. The season 4 of the Bigg Boss show will consist of 15 to 16 contestants including a common man. Bigg Boss is the popular reality show in Telugu with celebrities like Popular TV anchors, show hosts, comedians, Telugu serial actors, Tik Tok stars.

As per the Tollywood Gossip, Bigg Boss Telugu Season 4 will be hosted by any Mega Hero or Ramya Krishna. As we all know, Ramya krishna has shared hosting space with Nagarjuna in season 3 when he was in a pre-planned trip. Moreover, she did a wonderful job in handling the participants as a Bigg Boss Telugu Host. The season 4 show will consist of 16 contestants and one common man, and the selection of the common people who will enter the house of Bigg boss will be done through the auditions in Telugu states.

As per the news circulating on the Internet, there are many big star names have been listed for the Host position in Telugu. According to various online magazines, the expected names for the host in the Season 4 are Nagarjuna, Ramya Krishnan, Vijay Devarakonda and others. But, officially its confirmed that Bigg Boss Season 4 will be hosted by Nagarjuna again.

According to the pre planned schedule, the TV series has to be launched on 05th July, 2020 and the Grand Finale on 18th October, 2020. But, due to the Lockdown, the opening date of Bigg Boss Telugu Season 4 has been postponed to September. So, wait for the official confirmation from Star Maa and Bigg Boss officials.

This season 4 is going to be the biggest reality show in Telugu with new celebrities and big personalities from Telugu states. Famous TV anchors, show hosts, comedians, Telugu serial actors, Tik Tok stars, most trending Telugu people on You Tube and social media and others can be taken as the contestants in Bigg Boss Season 4. Moreover, this season is going to be loaded with more fun and glamour.

Even If you are not a celebrity, you can participate in the Big Boss Season 4 Telugu by completing your registration as a common man. The registration and audition details will be announced soon by the management of the Bigg Boss Telugu.

The details regarding to the Telugu Bigg Boss audition and selection for Season 4 is already completed by Star Maa TV channel and the management. Big Boss Telugu reached the heights of success last season, so this year too, the general public is likely to see it as part of reality TV show.
The online registration process for the Bigg Boss season 4 Telugu can be done only after the official confirmation by the Star Maa channel. After the official confirmation, contestants have to fill all the personal details and contact details along with the introduction video and has to submit it.

To save your favorite Contestant, just give a missed call to the below mentioned mobile numbers.