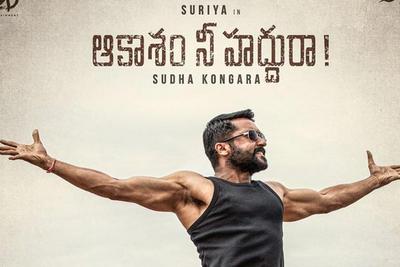 Aakasham Nee Haddhu Ra movie starring Suriya who is playing the role of GR Gopinath while Aparna Balamurali, Karunas, Jackie Shroff as a Vinod Rajan, Mohan Babu, Paresh Rawal and others playing the supporting roles. The film is based on events during the life of Air Deccan founder Captain GR Gopinath. Here is the experts views on Suriya’s Aakasham Nee Haddhu Ra Telugu Movie Release on amazon Prime from 30th October 2020.

Tamil star Surya’s Aakasham Nee Haddhu Ra will be premiered directly on Amazon Prime on 30 October, making it the the first big-budget movie in Tamil film to take the digital turn. Surya made the announcement regarding the release of his much awaited Aakasham Nee Haddhu Ra (Soorai Pottru in Tamil) as there is a uncertainty over the theatres reopening in India.

Apart from announcing the films release date, Suriya has also posted a statement and reasons for skipping Theatrical release and why he opted for a direct OTT release.

The whole movie is inspired by the life of Captain Gopinath, Air Deccan founder. The movie, which is scheduled for release on direct OTT platform will be on 30th October, is a multilingual directed by the Sudha Kongara.

Actor Suriya announcing the release date of his upcoming multilingual movie and he wrote on Twitter saying that “taking into consideration of the creative people around him, he has decided to release Aakasham Nee Haddhu Ra on OTT asks Theater Owners and Fans understanding Will act in two more movies soon for theaters and will donate Rs.5 Crs for Cine workers and COVID warriors.