Skip to content
Highest Paid Heroines in Tollywood: Telugu Cinema also known as Tollywood is the third largest film industry in India. Tollywood releases around 300 movies per year. And, this industry does around 5000 crores of gross business annually in various ways (Theaters, Satellite, Audio, Dubbing, Digital Platform, etc). The expenditure for high budget films in Tollywood is more than any other film industry in India. This was proved with films like Bahubali, Saaho, RRR, etc. In the same way, the expenditures are more here. Here, filmmakers pay a lot of salaries to artists, especially heroin. Moreover, the top heroines in Telugu Cinema hails from Bollywood. 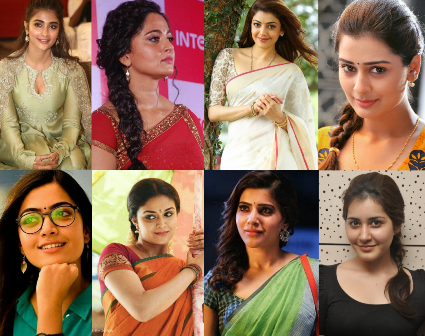 If you are searching for the Highest Paid Actresses in Tollywood, then you should read this article. Here’s a list of Telugu cinema heroines who are earning over Rs 1 crore per film. So, let’s  have a look into the highest paid heroines in Telugu now.

Pooja Hegde: In recent times, she is the only heroine who worked and working with big super stars of Tollywood like NTR, Mahesh Babu, Allu Arjun, Ram Charan, Prabhas and others. Pooja Hegde remuneration can be up to Rs.5 cr.

Anushka Shetty: She is not even starring in the Top Heroes films, she is competing with Big Star Heroes by making Heroin oriented films. She is the only heroin in Telugu who can bring audience just with her photo on Movie Poster. Even after 14 years of her journey in Tollywood, she is considered as a top heroin. Her payment per one movie can be up to Rs.5 crore

Kajal Agarwal: Her film graph says everything. She is one of the most successful heroins in Tollywood. Her filmography says this fact. She has done more than 50 films in the span of 10 years. Even after 12 years in South Indian Cinema, she is demanding around Rs.3 Crores per movie.

Keerthy Suresh: She become famous after the release of Mahanati. No doubt, she will be in the top 5 heroins in Tollywood as of now. Keerthy Suresh remuneration can be up to Rs.3 cr.

Samantha Akkineni: She started her film career in 2010 and soon after the release of Ye Maaya Chesave she has received great appreciation for her acting skills. And, immediately she started appearing in star heroes movies like Brindavanam, Dookudu, Eega, etc. till 2016 in  Telugu. She reduced her films after the wedding with Chaithu. Her remuneration is up to Rs.2.5 Crore.

Tamannaah: She has been completed 14 years of journey in Telugu film industry. However, she is one of the leading heroines in South Indian Cinema. Moreover, she is the main choice for historic movies in TFI. This was proved with Bahubali & Sye Raa.  Her payment per one movie can be up to Rs.2.5 crores.

Rakul Preet Singh: As of now, she does not have much film offers with star heroes in Tollywood. Now, she has been busy with couple of Tamil & Bollywood movies. Her last film in Telugu is Manmadhudu 2. Her remuneration can be up to Rs.2.5 Crore in Telugu.

Rashi Khanna: Her movie journey in Tollywood is very cool. No doubt, she will be in the Top 10 for another 5 years. She is demanding a salary package of Rs.2 crore per movie.

Payal Rajput: 2020 is going to be a big year for Payal. She is coming up with Disco Raja movie pairing with Ravi Teja and Venky Mama. Her remuneration can be up to Rs.1 Crore in Telugu.

Note: These figures are calculated based on the news on Television and other digital sources. This cannot be the original figures. But, we tried to reach the mark.