Skip to content
Telugu Movies Shelved Before The Release: There are a lot of Tollywood movies that got shelved before its release. All these unreleased movies have impressed Telugu audience with their Teasers, Posters and Trailers. But, somehow these movies got shelved due to various reasons. Let us have a look into the Telugu Unreleased movies till date. 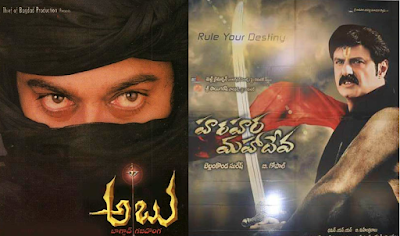 Abu Baghdad Gajadonga: Megastar Chiranjeevi has to play the lead role in the project titled “Abu Bagdad Gazadonga”. The movie has to come under the direction of Suresh Krsna who worked with many Super Stars of Tamil, Hindi and Telugu. Unfortunately, the shooting of the film was interrupted due to protests from religious groups, who claimed that the group had soaked documents from the Holy Quran, which looked like ancient scriptures. You can find the amazing pre-look posters of Chiranjeevi in Abu Bagdad Gajadonga on Internet.

Chiranjeevi and RGV Movie: After becoming a Successful director with Siva and Satya, RGV has planned a movie with Megastar Chiru under Aswini Dutt’s production house. During the production stage, RGV has ran away to Bollywood for his commitment with Bollywood films. You can find the video song of Chiranjeevi and Urmila Matondkar of this untitled film on YouTube.

Narthanasala: Due to sudden death of Actress Soundarya, the movie has dropped after shooting a little part. We missed up this amazing film which is under the direction of Balakrishna.

Rythu (Balakrishna & Krishna Vamsi): This has to be the 100th movie of Balakrishna. Krishna Vamsi has approached Amitabh Bachchan for a strong character in a supporting role. But, Amitabh has rejected the offer. And, the project has shelved without any specific reason.

Hara Hara Mahadeva: This is an another Balayya movie which got shelved after the movie opening. The movie has to come under the direction of B.Gopal with Paruchuri Brothers story. Bellamkonda Suresh is the producer of the film after the big disputes with Balakrishna. Unfortunately this project never saw the set light.

Savitri: The dream project of director’s Teja with Venkatesh has never materialized. There was a talk in Tollywood for many years on this project.

Satyagrahi: No one knows the reasons what have stopped after the film’s official launch. The movie has officially announced by Power Star Pawan Kalyan in a press meet. However, it has not materialized.

Also, there are many other Telugu movies like Jana Gana Mana (Puri and Mahesh Babu 3rd Film), Mahesh Babu and Nagarjuna Film, Pawan Kalyan & Sangeetham Srinivasa Rao Project, etc. which has not materialized after the announcement.