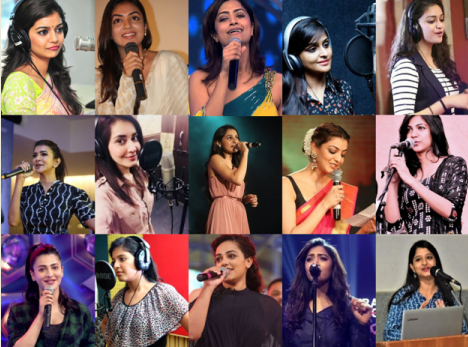 Even though there are a lot of actresses interested in singing but not every actress can go for singing because of umpteen reasons. Thus, we didn’t see a plethora of actresses in every south Indian language who crooned for their own film.

It is surprising to know that few actresses like Sruthi Haasan, Remya Nambeesan, Nithya Menon, Andrea Raasi Khanna etc., take up playback singing as one of their professions and perpetuate it by singing for other actor films too. It seems that the dynamics of the movie business turned into another level where our actors find the success formula that cooperation should exist between contemporary rivals to have a healthy environment in the cinema industry.

Let’s dive in with the list of South Indian Actresses who crooned for the films!

Sruthi Haasan, the daughter of Kamal Haasan, is a multi-tasking actress like his father. She has been singing since her childhood where she did playback for over 30 films in her film career.  Sruthi is passionate about music along with acting where she composed the music tracks for the Film “Hisss” starring Mallika Sherawat in 2010, Unnaipol Oruvan starring Mohanlal, Kamal Haasan in 2009. She loves to perform in concerts where she could flaunt her talent graciously to the world of music. She is extremely nimble in her selected niches and succeeded with flying colours. She can sing all types of songs like melodies, Item songs, sentimental, rocking etc., whatnot. She is one of the gifted actresses for South Indian Cinema. Hope for her to continue to this legacy uninterruptedly.

After Shruti Haasan, the actress who caught our eyes is “ Pizza” fame “Remya Nambeesan”. Like Sruthi, she is an extremely talented artist in acting as well as singing. She predominantly appears in Tamil and Malayalam films where she has acted in 70 films as a child artist as well as the heroine and she lent her voice to over 25 musical tracks which are notable ones. Wishing a prosperous career in her chosen domain.

Andrea Jeremiah is a singer turned actress who has crooned for a number of films across Tamil, Telugu and Malayalam. She works under the musical composition of Devi Sri Prasad, Harris Jayaraj, Yuvan Shankar Raja, Anirudh Ravichander, GV Prakash, Thaman etc., She started her debut in playback singing for the song “Kaanum Kaanum Nokia” composed by “Harris Jayaraj’  in “Aniyan” starring “Vikram, Sadha”  directed by “Shankar”  in the year 2005 .

One of the greatest gifts that God has given to “Nithya Menon” is her soulful voice. She never dreamt of becoming a singer but music directors found that spark in her and started giving playback singing to her. She sang her first song called “ Payasa”  for her second Kannada film called “Aidondla Aidu”. From then she crooned for films on and off according to her feasibility.

Though Nithya Menon from  Malayali family can speak all south Indian languages along with Hindi and English as part of the profession.

Mamta Mohandas mainly works in Malayalam Cinema. She is an actress as well as a playback singer. She has been balancing both professions since the beginning of her career. Though she is Malayali, she crooned her first song in Telugu called “Raakhi” composed by “Devi Sri Prasad”. From then she went to sing over 15 songs in three years.

Meghana Raj is known for her works in Kannada Cinema. She’s born in the cinema family where her parents Sundar Raj and Pramila Joshi were notable actors in Sandalwood. She sang a couple of songs in Malayalam and Kannada movies.
Keerthy Suresh

Nazriya Nazim known for her works in Mollywood entered into the cinema industry because of singing shows but she crooned only four songs so far.

Raasi Khanna predominantly works in Tamil, Telugu and Hindi. She crooned the  first time for her film “Joru” and then she went on to sing a couple of songs for other films under the musical composition of “Bheems, Manisharma, SS Thaman”

Kajal Agarwal crooned only one song for the Puneet Raj Kumar’s film “Chakravyuha” composed by “SS Thaman”. It is to be noted that Tollywood actor “Jr. Ntr” also sang one of the songs called “Geleya, Geleya” at the behest of the music director.

Sandalwood actress “Aishany Shetty” started her film career with the film “Jyothi alias Kothi Raja” in the year 2014. She crooned for a song called “Thannage Idvi” along with Punnet Rajkumar in her third film “Rocket” directed by “Shiva Shashi”  in the year 2015.

As per our knowledge, we furnished the list of South Indian actresses in female as playback singers. Kindly comment if you think we forget to mention any heroine in the article.

Keep visiting our website for more interesting and informative updates…