Skip to content
Ram Gopal Varma Horror Movies: RGV is one of the top film makers in India & well known for his cult movies, style of direction, technical finesse, and realistic approach. Moreover, he proved himself as a film maker in various film genres like thrillers, crime, romance, suspense, horror, comedy, etc. But, the crime & horror movies has took him a lot of fame allover India. The name “RGV” has become a trademark for Horror Movies in 1990’s. 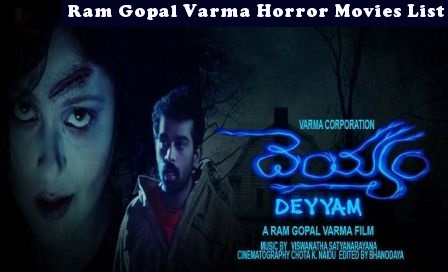 Beginning from his first horror film “Raat (Hindi)/ Raatri (Telugu)”, he made more than 10 successful movies in Horror genre. Also, he produced horror movies like Raat/Raatri, Vaastu Shastra, Agyaat, Raksha and other movies in horror genre. Moreover, his horror movies has a unique style in shot making, camera angles and sound which we cannot see in any other film makers movies.

1. Raat (Hindi)/ Raatri (Telugu) – 1992: Cinematography and music wins the show. The camera angles, music, technical aspects and the screenplay, everything pitch perfect. It’s as perfect as the director’s RGV vision.

2. Deyyam (Telugu) – 1996: Deyyam is one of the best horror movies of RGV till date. The performances of artists like Jayasudha, JD, Maheswari, Jeeva are astonishing.

3. Kaun? (Hindi)/ Evaru (Telugu) – 1999: Kaun is one of the best works of RGV and Anurag Kashyap (story writer for kaun). You cannot see more than 4 characters in the movie. Urmila Matondkar and Manoj Bajpayee steeled the show. Since, it is very difficult to manage a whole movie with just 3 characters.

4. Bhoot (Hindi)/ 12 Va Anthasthu (Telugu) – 2003: This movie was made in 2003. But, still it will scares you. The roles of Ajay devgan , Urmila and Rekha are very interesting. Though, Rekha played a small role as an exorcist it was a challenging character in her entire film career.

5. Darna Mana Hai (Hindi) – 2003 –  As a producer : The first Indian anthology horror drama film produced by RGV. RGV has come up with this idea to present six different short stories in one movie to the Indian audience. Prawaal Raman is the director of this movie.

6. Vaastu Shastra (Hindi) / Marri Chettu (Telugu) – 2004 – As a Producer: The film is very scary because of its cinematography and its sound effects. It’s worth watching movie, if you like horror films.

7. Agyaat (Hindi)/ Adavi (Telugu): This movie resembles predator (Hollywood Movie). The movie has got big openings in Telugu due to of the actor Nikhil and RGV combination.

8. Phoonk (Hindi)/ Raksha (Telugu) – 2008: Phoonk is one of best works of RGV. This movie story line is based on black magic and its circumstances. After receiving positive response in Hindi, this script is again remade in Telugu with little changes.

9. Bhoot Returns (Hindi) – 2012: This is the sequel for Bhoot(2003) movie. This movie has received mixed responses and declared as a flop at Box Office. But, it is worth watchable.

10. Ice Cream: This movie is a new try  from RGV mixing romance with horror.  This movie is one time watchable for Tejaswi Madivada sizzling performance.