Skip to content
Highest Paid Actors in Telugu 2020: Tollywood is one of the biggest film industries in India where the actors remuneration/ salary is very high. Nowadays, Telugu actors demanding remuneration which is almost equal to Bollywood big celebrities. Stars like Chiranjeevi, Mahesh Babu, Pawan Kalyan, Prabhas, All Arjun, Jr NTR, Ram Charan are demanding not less than Rs. 25 Crore per movie. Also, the second tier stars like Nani, Vijay Devarakonda are paid more than Rs.10 Crore per movie. 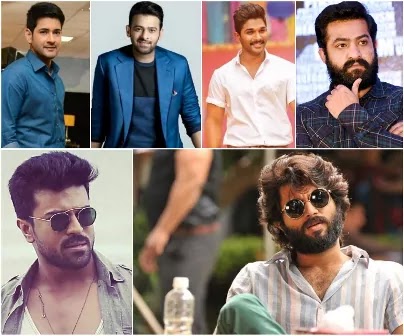 As we all know, the remuneration or salaries of Heroes changes on the Box Office collections and the Business of their previous films. Tollywood stars like Allu Arjun, Mahesh Babu, Prabhas, Chiranjeevi, Ram Charan has a wide range of audience across India. These five Telugu heroes films did a Business Rs. 200 Crore worldwide. However, Tollywood has also Heroes like Nani, Ravi Teja, Vijay Devarakonda, Naga Chiatanya, Nithiin and others for the minimum guarantee Business.

The remuneration of every Hero in the Tollywood depends upon their box office success, collection and various other factors. And the remuneration of each actor may increase because of the previous movie profits. As we know that our Telugu Heroes like Prabhas, Allu Arjun, Mahesh Babu, Chiranjeevi, Pawan Kalyan have a huge box office stamina, even their flop movies can collect up to 60 crs share at an average.
Even the small budget movies in the Telugu film industry are gaining huge profits at the box office due to of the universal content. Moreover, Tollywood movies recovering more than 100% of the movie budget before the release itself. Check out the list of Telugu actors and their remuneration per movie in the below section.

Telugu Heroes demanding more salaries due to of their craze across India. Also, the movies that made in Tollywood are now releasing in PAN India level. Telugu film industry has become one of the biggest film industry in India after the release of High budget movie called Bahubali. Telugu actors who are making PAN Indian movies demanding high remuneration more than Bollywood actors.

Note: All these figures are based on their previous films Business and Assumption. The actual figures many be higher or lower.

Remuneration of Chiranjeevi During 1990’s