Dhanush Telugu Movies List: Today, Dhanush has become one of the best PAN Indian Actor and well known for his way of story selection. Most of his Tamil movies have dubbed into Telugu and got positive talk from Telugu audience across Andhra and Telangana. However, he become quite famous after his Telugu movie “Raghuvaran B.tech”. The movie has become a Super Hit in Telugu. After that, most of his Tamil movies started to dub into Telugu. 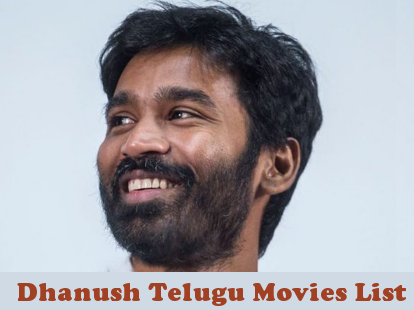 Dhanush is an inspiring personality for many aspiring young actors in South India. Moreover, He is one of the well known face in Tamil Nadu, Andhra, Kerala and other south Indian states. Today, most of his movies are dubbed in other regional languages of India. However, contemporary actors & film makers of these days are focusing on making bilingual, multilingual or PAN Indian movies.

Most of the Tamil heroes releases at least 2 movies in a year unlike Telugu Heroes. Similarly, Dhanush belongs to such kind of actors who releases atleast 2 films in a year. As of 2020, he completes 41 movies in Kollywood. Below are the list of Dhanush Telugu movies where the actor involved in directly (Dubbed) or indirectly (Remakes).

TeluguAce has compiled a fully updated list of Dhanush Telugu movies till 2020. We will update the list as soon as the new movies of Dhanush arrives. Moreover, you can find the links to watch Telugu dubbed movies of Dhanush from the above table. Comment your favorite movies using the below comment box.