Skip to content
Anaganaganaga Song Lyrics in Telugu: Aravindha Sametha is a 2018 blockbuster Telugu movie of Jr. NTR. The movie was directed by Trivikram and the music is composed by Thaman. In the album of Aravinda Sametha, the song “Anaganaganaga” was a big hit. The lyrics of this song are written by Sirivennela Seetharama Sastry which are very catchy and easy to hum. Moreover, the singer Armaan Malik also deserves a lot of appreciation. 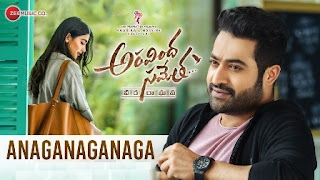 This movie has excellent star cast featuring Jr. NTR, Pooja Hegde, Jagapathi Babu, Naga Babu, Sunil, Eesha Rebba and others in lead roles. If you are searching for the Anaganaganaga Song Lyrics in Telugu, then you are in the right place to find them. In the below section, you can find the lyrics along with the album details.