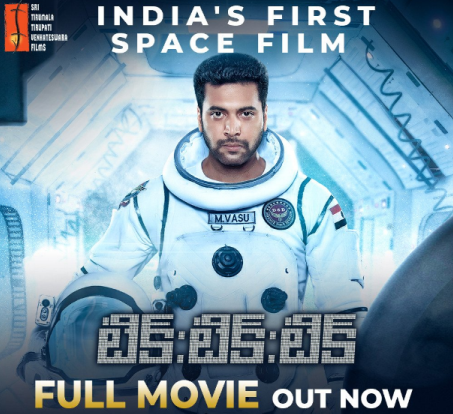 Jayam Ravi’s Tik Tik Tik finally hit the YouTube today on SSTV films YouTube channel. Watch the first South India’s Space Thriller movie for free in HD now. Tik Tik Tik is the first complete Space Thriller movie of South India is now available in Telugu with the same title. The movie is declared as a Box Office hit and it has an IMDB taing of 6.1/10. Moreover, the movie is one of the worth watchable movie for those who prefer to watch sci-fi movies. So, why are you waiting? watch Tik Tik Tik Telugu Full Movie Online for free now.

An unidentified asteroid hits the surface of the Earth, causing panic in the city of Vizag. The Indian Air Force has learned that another oversized asteroid will hit Earth and wipe out some states in southern India. Seeing this, the Indian army recruited Vasu (Jayam Ravi) and his gang and embarked on a mission to save the planet from asteroids.