Skip to content
Underrated Telugu Movies: Telugu people always loves to watch Athadu movie even now in Star MAA. The movie has a good content and it is a worth watching Telugu movie of all time. But the unknown fact is “Athadu” is said to be a flop at Box Office when it was released in 2005. Similarly, there are hundreds of movies in Telugu which are not recognized well in Theaters. But, these movies are big hits on Television. Let’s have a look into some Underrated Telugu Movies.

Many people says that Aithe, Anukokunda Oka Roju, Aa Naluguru, Prayanam, Vedam and other few Telugu movies are the most underrated. But, it is not correct. All these movies are well appreciated and acclaimed by Telugu audience when they were released. So, If you want to find the real Underrated Telugu movies, then should read this complete article. Let us get back to those forgotten gems and revisit cinematic masterpieces in Telugu Cinema.

There are a lot of Underrated Telugu Movies till the time of writing this post. Here we have gathered a list of best underrated Telugu Movies till 2019. The list may also consists of movies which we personally like along with the public opinion. Moreover, we have considered public opinions while writing this article. Let’s have a look at the movies which are the best movies in Telugu language but not successful at the Box Office.

If you are searching for underrated movies in Telugu Cinema, you are at the right place. You can check a few of the movies here. However, we regularly update this list based on the interest of the viewers. So, go through the below sections to check the most underrated telugu movies in recent times. 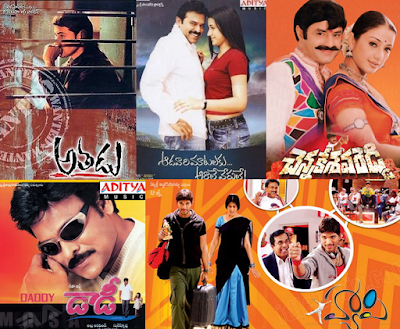 Most Underrated Telugu Movies of Tollywood

Below are the list of Telugu movies which are recognized as hits after the TV telecast. And, most of these movies were received high TRP’s on TV channels.

1. Athadu:This movie is one of the best movies in Actor Mahesh Babus Film career in performance wise. Tollywood top film maker and dialogue writer “Trivikram Srinivas” is the director for this movie. This movie is telecasting in TV channels with high TRP’s till now. Also, the movie scenes are famous for comedy dialogues with a certain logic.

2. Happy (Allu Arjun): Allu Arjun starring Telugu Movie Happy is one of the biggest Hits after telecasting on TV. This movie was directed by Karunakaran. This is one of the best works of director Karunakaran after Tholiprema. Unfortunately, this movie was not done well at box office. But after the TV telecast, The movie is well recognized for the comedy timing of Actor Allu Arjun and the music.
3.Aaduvari Maatalaku Ardhale Verule: AMAV is one of the best drama/ comedy movies in Tollywood starring Venkatesh and Trisha in lead roles. The movie has good TRP records on Television.
4. 1 Nenokkadine: Mahesh Babu – 1 Nenokkadine Movie declared as a disaster at the Box Office, but the movie was later received good impressions from the young generation in Youtube and in Online. This is one of the most underrated Telugu film ever. People likes to watch this movie repeatedly due to of the excellence in screenplay.
5. Chakram: Prabhas – Chakram is Telugu Family Drama Movie with a lot of emotions. Songs are plus point to this movie.
6. Daddy: Daddy is one of the family drama movies with excellent family elements showing the emotional bonding between husband, Wife, and Children. But the movie got failed due to big expectations from fans on Mega Star Chiranjeevi Daddy movie.  Later Chiranjeevi also mentioned in an Interview saying that, this fill would be a Blockbuster If it has done by a Family Hero like Venkatesh.
7. Chennakesava Reddy: Wrong Time Release. Two movies with similar elements released on the same season (2002 Mid Year) – Chiranjeevi movie Indra and Balakrishna Movie Chennakesava Reddy released in the same season where Chennakesava Reddy not able to stand up to the mark. But even the director of the movie VV Vinayak used to mention Chennakesava Reddy is the best works from his list of movies.
8. Khaleja: This movie is from the combination of Mahesh Babu and Trivikram Srinivas for the second time after Athadu. This movie has remained as a disaster at Box Office. However, the movie has got good acclaim from the audience and the film lovers after the release in TV and OTT platforms. The best of the of this movie is wholesome entertainment. You can enjoy watching this movie from the starting scene to the end card.
9. Bujjigadu: This Telugu movie is directed by Puri Jagannadh starring Prabhas, Mohan  Babu and Trisha in lead roles. The movie dialogues and scenes are still entertaining people in Television. But unfortunately, this movie not did well in theaters.
10. Neninthe: Director Puri Jagannadh’s loving movie received well in YouTube, online channels, and TV by the Telugu people than in Theaters.

11. Banam (Nara Rohit): This is the debut movie of young actor Nara Rohit. The movie is absolutely a true attempt by the director – Chaitanya Dantuluri. However, 80% of the Nara Rohit movies are underrated.

13. Anukshanam (Manchu Vishnu & RGV): This movie was directed by RGV starring Manchu Vishnu in a lead role. This movie script looks similar to a korean movie. But, the scenes are entirely different & the movie has the RGV mark of film making.

14. Nandanavanam 120 KM: Today generation may not know about this movie. But, it is one of the best works from director Neelakanta. This is a Psychological Thriller Movie with honest attempt. Definitely, You enjoy watching this movie.

15. Kedi (Nagarjuna): This is one of the excellent script narrating the journey of an Individual. I have watched this movie not less than a 50 times. The main elements attracted me to watch this movie again and again; Screenplay, Star Cast, Music & a simple story with perfect direction. If this is an English Movie, definitely it might have been a Big hit. This movie was directed by Kiran Kumar. And, Sandeep Chowtha has given a wonderful music to this movie.

We often miss some milestone films in the rush. So, comment your favorite movies in the comment section below.