Skip to content
Telugu Hit Movies 2018: Are you still curious about the Hit movies & Blockbusters in Telugu for the year 2018? then, check out this post. Tollywood Industry produces highest number of movies when compared with Bollywood & Kollywood. But, the success rate in Telugu Industry is quite less when compared with Hindi & Tamil Cinema. Nowadays, mouth publicity is playing an important role than reviews in Telugu Film Industry. Based on the several factors, TeluguAace Team has made this list of Telugu Hit Movies 2018 to help the movie Buff’s. 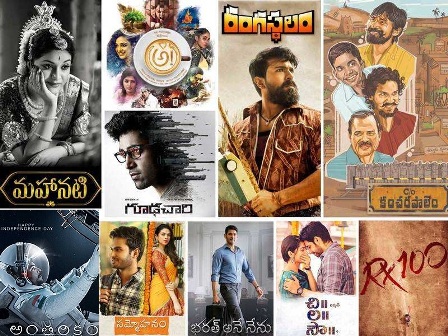 Undoubtedly, I want to start my list with the movie, C/o Kancharapalem

C/O Kancharapalem is a promising & worth watching movie directed by Venkatesh Maha. The film has received a good acclaim from all sections of people. This is one of the most realistic movies of Telugu Cinema ever.

Goodachari, This movie was directed by Sashi Kiran Tikka. Where Adivi Sesh, Prakash Raj, Jagapathi Babu & Sobhita portrayed the lead roles.This movie has created a lot of expectations with the YouTube Trailer itself. The action sequences are a big plus point along with the story line.

Rangasthalam, One of the Biggest Blockbuster of 2018. This movie has got a lot of fame to all the actors & technicians. The movie revolves around the 1980’s based story line.

Antariksham 9000 KMPH, This if the first and the best space movie of the Tollywood. Moreover, it will remains as the India’s best space film ever. The movie iss directed by Sankalp Reddy and stars Varun Tej, Aditi Rao Hydari, Lavanya Tripathi and others in lead characters.

Aravindha Sametha, After the biggest flop of Agnathavasi, Trivikram is back with his mark of movies with Aravindha Sametha. Even the story is quite common, the narration made the movie to achieve success at Box Office.

Mahanati, Trendsetter in Indian Biopic movies. This movie has got a wide reputation not only from Telugu. Tamil, Malayalam and Kannada audience also appreciated the attempt of the director and actors. Moreover, this movie has become successful at Box Office and Kirthi Suresh is awarded National Award for Best Actress.

There are a few more movies which created their own mark in Telugu Cinema Industry in the year 2018. RX 100 is considered as one of the best commercial successful movie in 2018. Similalrly, movies like Hello Guru Prema kosame, Taxiwala, Jai Simha have drawn profits over the investment.

Movies like Needi Naadi Oke Kadha, Sammohanam, Awe!, Chi La Sow are critically acclaimed and got a lot of appreciations from the celebrities in the Telugu film industry. Let us have a look at the few commercial and critical acclaimed hit movies in the year 2018.

Along with the straight movies, there are a few Telugu Dubbed Movies which have done an amazing job at Andhra Pradesh & Telangana Box office. The following are the list of Telugu Hit Movies 2018 which are dubbed from Tamil & Kannada languages to Telugu.

KGF (Yash Movie): As we all know, KGF is one of the biggest blockbusters of 2018. This movie is first made in Kannada. Later, the movie has been dubbed into all other languages.

Gang (Suriya Movie): Music & story are the main plus points for Gang. BGM and Songs of this movie are composed by Anirudh.

U TURN (Smantha Movie): This movie is simultaneously made in Tamil & Telugu. This movie is considered as above average & one time watchable. Anirudh music is an added advantage.