Skip to content
Telugu Films That Deserved More Love When They Released: There are many Telugu films that haven’t got good response from Telugu audience when they have released. Maybe it’s financial problems, or production delays, or too much progressive content that is “too early for its time” – there are many reasons for not getting the right initial exposure for some of the best movies . Fortunately, the film lasts forever … and it’s never too late to watch. 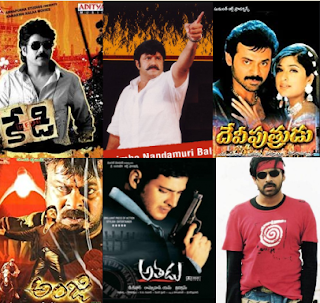 Kedi (Nagarjuna): This is one of the best movie but unfortunately the movie is too early to its time of release. The movie is directed by Kiran Kumar and produced by Siva Prasad Reddy. Music of this album is a Super Hit and composed by Sandeep Chowta.

Mrugaraju (Chiranjeevi): People have not accepted Chiranjeevi in the role of Raju. The movie was a disaster but it is a worth watchable and suitable to the current generation imaginations.

Daddy (Chiranjeevi): Chiranjeevi often used to tell, If my character in the movie is done by a star like Venkatesh, it might be a big Hit. Daddy is one of the Telugu movie which deserves more love and response from audience. However, the movie is a big Hit after its TV premiers by receiving high TRP’s.

Chennakesava Reddy (Balakrishna): This is one of the best works of Balakrishna and VV Vinayak. The movie has a strong story and backdrop. But, people have not accepted the film and declared as a Flop. But, Telugu audience are still crazy about the songs and Scenes of this movie.

Devi Putrudu (Venkatesh): One of the best Fantasy movie in Telugu and rare of its kind. Kodi Ramakrishna and Manisharma have done their best. The movie is too early for its time of release.

Anji (Chiranjeevi): This is a one more Fantasy movie in Telugu directed by Kodi Ramakrishna again with great songs from the Telugu Music composer, Manisharma. The movie songs and scenes are still a miracle. This is one more Graphic wonder and too early for its release.

Athadu (Mahesh Babu): The movie has not received the positive response in Theaters due to various reasons. However, the movie is one of the cult classic for its dialogues, comedy scenes and romantic scenes. Athadu has become a big Hit after the TV Telecast. This is one of the most advanced film at that point of time.

Gudumba Shankar (Pawan Kalyan): Similar to Athadu, the movie has a big TRP ratings but unfortunately it doesn’t worked out well in Theaters. Based on this movie concept many other films later have become big Hits in Telugu.

1 – Nenokkadine (Mahesh Babu): The concept of the movie is more advanced at the time of its release. Moreover, people have confused in understanding the screenplay of the film. However, the movie is well received and applauded by current generation.

Saaho (Prabhas): One of the high budget movie of Tollywood,  crossed the limits of expectations. Saaho is definitely too early of its time for Indian audience.