Skip to content
Suriya Telugu Dubbed Movies List: Surya is an actor, philanthropist and film producer of Indian cinema born on July 23, 1974 in Chennai. He is mainly known for his work in the Tamil film industry. He is the oldest son of the Tamil film actor Sivakumar. He also has a younger sister and a younger brother Karthi. He is married to a famous actress, Jyothika, with whom he appeared in seven films. 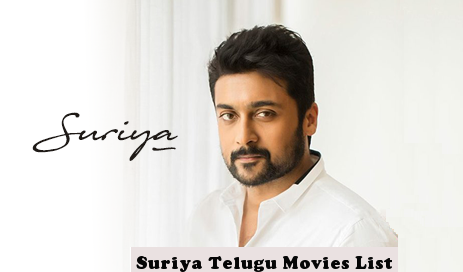 Before starting his career in the film industry, he worked in a textile export factory for 6 months without revealing his identity as the son of a famous actor “Sivakumar”. Surya has 2 children, a son named Dev and a daughter named Diya. Under, we have fully and completely updated the list of all Suriya movies.

A Complete List of Suriya Telugu Dubbed Movies Till 2020

At the age of 22, He entered into Kollywood as an actor through Nerukku Ner (Mukha Mukhi in Telugu) in 1997, produced by Mani Ratnam and directed by Vasanth. After Nerukku Ner, he worked in many Super Hit movies like Nanda (Aakrosham in Telugu), Singham (2010), Singham 2 (2013), Perazhagan (Sundarangadu in Telugu), Ghajini (2005), Varanam Ayiram (Surya S/o Krishnan), Veedokkade and much more . To find out more about his films, go through the below listing.