Skip to content
South Indian Film Actors As Well As Playback Singers: As we already discussed, we will come up with the article regarding the south Indian actors who did playback for their own films and acted for that particular song. In the last article, we have jotted down the list under duet segments like co-stars who sang for their own film. Now, the current article is about the South Indian Actors as playback singers in their film career. 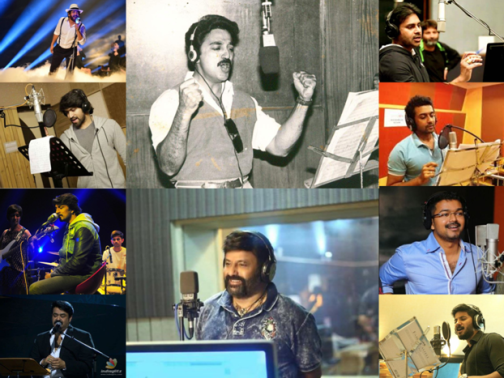 Even though there are a lot of actors interested in singing but not every actor can go for singing because of umpteen reasons. Thus, we didn’t see a plethora of actors in every south Indian language who crooned for their own film.

It is surprising to know that few actors like Kamal Haasan, Mohanlal, Vijay, Silambarasan, Jr. Ntr, Dulquer Salmaan, Dhanush take up playback singing as one of their professions and perpetuate it by singing for other actor films too. It seems that the dynamics of the movie business turned into another level where our actors find the success formula that cooperation should exist between contemporary rivals to have a healthy environment in the cinema industry.

Let’s dive in with the list of South Indian actors who crooned for the films!

Mohanlal: Mollywood legend actor “Mohanlal” is one of the finest and rare actors who has done nearly 350 films in four decades. During this prosperous career, he has developed a great interest in playback singing where he sang nearly “50” songs in his films by setting high standards for the budding actors.

Mammotty: Though Superstar Mammotty is senior to Mohanlal he has least interest into singing where he sang only a couple of songs in 50 years of his career. He had done over 400 films so far including all South Indian as well as Bollywood industries.

Dileep: Another Mollywood actor “Dileep” who acted nearly 150 films sang for a couple of songs in the film at the behest of his music directors.

PrithviRaj Sukumaran: Mollywood handsome hero “Prithviraj Sukumaran” known for his best acting made his debut in singing for the title song “Kaane Kaane” in the film “Puthiya Mukham” which was released in 2009 and did playback singing over 10 films so far at the behest of his music directors.

Dulquer Salman: Mollywood Crazy actor “Dulquer Salmon”, the son of Malayalam superstar “Mammotty” known for his style craze among youth made his singing debut with his film “ABCD” where he sang “Johnny Mone Johnny” which was released in the year 2013.

Kamal Haasan: As we all know, Kollywood superstar ‘Kamal Haasan’ specialised in many occupations like actor, dancer, director, screenwriter, producer, playback singer, lyricist, choreographer.  He is a complete actor with well content in different domains, so it is not any new information for us that he is a playback singer for his films since the beginning of his cinema career. It seems that he has a voracious interest in trying new things. That’s the reason we get to see him uniquely all the time. He sang nearly 100 songs including Hindi, Telugu, Tamil and Malayalam.

Ilayathalapathy “Vijay”: Not many people are aware that Kollywood superstar Ilayathalapathy ‘Vijay’ has started singing since his initial stage of acting. Along with the acting in the movies, on and off does playback singing for his “films” as he is keen interest in singing too. It seems that he got his singing trait from his mother “Shoba Chandrasekhar” who was a playback singer….

‘Chiyaan’ Vikram: Not many melophiles are aware that Kollywood actor “Chiyaan” Vikram is fond of playback singing. Recently he had sung a blockbuster song in ‘Swamy Square’ starring “Vikram, Keerthy Suresh” along with the heroine “Keerthy Suresh” under the music composition of “Devi Sri Prasad”.

Siddharth: Bommarillu actor “Siddharth” has such an adorable voice that any singer could desire for. He did playback singing for almost 15 songs for his films and he also sang for other actor films on and off. It is to be noted that all the songs recorded by Siddarth are quite singable tracks.

Silambarasan: Kollywood actor Silambarasan is also known as “Simbu” is an actor, director, playback singer, screenwriter, lyricist as well as music director. He is into a couple of departments in film-making. He predominantly sings for Tamil and Telugu films. He crooned for nearly 100 songs in his 25years of a film career.

Dhanush: As we are aware of the fact that, for the first time in South Indian cinema, ‘Why this Kolaveri di?’  a mashup track is sung by Dhanush from the Tamil film “three” starring “Dhanush, Sruthi Haasan” went viral over the Internet because of its unique version of what we called ‘Tanglish=Tamil+English” slang. It is a known fact that “Dhanush” has a natural interest in singing along with acting where he sang nearly 50 tracks for Tamil and Telugu films.
Suriya: Though Kollywood actor “Suriya” is not keen into the playback singing as his contemporaries like Vijay, Dhanush and Silambaran but sang a couple of songs at the behest of his music directors.
Vishal: Kollywood actor “Vishal”  lends his voice into playback singing for the first time for his film “Madha Gaja Raja” starring “Vishal, Anjali and Varalakshmi Sarathkumar”. He sang  the musical track called “My dear loveru” which is Tanglish(Tamil+English) slang under the musical composition of “Vijay Antony”
Sivakarthikeyan: Television host turned actor “Sivakarthikeyan” entered into film industry a decade ago and he is into playback singing since 2013 where he sang nearly 10 tracks for his films at the behest of his music directors
Vijay Sethupathi: Not many are aware that kollywood versatile actors sang for films. He crooned three songs so far  at the behest  of the music directors for other actor films. His first song was from the movie “Hello Naan Pei Pesuren” starring “Aieshwarya Rajesh, Vaibhav” in the year 2016. His next song for the film “ Peipasi”  in the year 2018 and the third song for the film “Ispade Rajavum Idhaya Raniyum” in the year 2019.
Dhruv Vikram: “Aditya Varma” fame “Dhruv Vikram”  the son of actor Chiyaan Vikram. He crooned a song called “Edharkadi” to which he wrote lyrics as well.
Vijay Antony: Pichaikkaran actor “Vijay Antony” started his career as a music director in the year 2005. Later he turned into an actor from the film “Naan” in the year 2012. Since he is a music director, singing is his part of music life.
GV  Prakash Kumar: Every actor’s story is different while GV Prakash’s story is different where he started his career as playback singer because he is born in the family of singers where he is the nephew of Oscar received Music Director “AR Rehman” and the son of Kollywood playback singer “AR Reihana”.
SJ Surya: Another Multi-talented hero in Kollywood actors list “SJ Surya” who is film director cum singer cum lyricist cum producer cum music director. He made his singing debut as well as direction with the film “Vaali” starring “Ajith, Simran” in the year 1999.

“Megastar”Chiranjeevi: Megastar Star “Chiranjeevi” known for his commercial hits in Telugu cinema did over 150 films. so far we have seen him in acting but he is completely away from singing.  He sang only one song called “Are Thammudu” from the film “Master” starring “Chiranjeevi, Sakshi Sivanand” which was released in the year 1997.
“Victory” Venkatesh: “Victory” Venkatesh started his film career in 1986 as the hero in “Kaliyuga Pandavulu”. It’s been 3 decades since he is into acting but he sang only one song in his prolonged cinema career.  He did playback singing for only one song called “Jingidi Jingidi” for the film “Guru” starring “Venkatesh, Rithika Singh” which is under the direction of Sudha Kongara.
Nandamuri Balakrishna: “Legend” actor Balakrishna Nandamuri crooned for the first time in his movie “Paisavasool” directed by “Puri Jagannath”. He sang  one song called “Mama ek peg la” to entertain his fans under the music composition of “Anup Rubens”. This song went viral among melophiles who love massy tracks.
Akkineni Nagarjuna: Akkineni Nagarjuna is someone who always tries something new to entertain his fans. He already owns the title called “Manmadhudu” for his fairy and young appearance even in his fifties. Like other actors, he is also one of the multi-tasker as he is an actor cum producer cum singer. He crooned two times in his films where one song in “Sitarama Raju” and other for “Nirmala Convent” were produced by him.
“Power Star” Pavan Kalyan: Everyone‘s singing zonor is different but the Pavan Kalyan selection of songs is different. He sang only for his movies especially in the folk zonor  which aims to entertain his audience. Like Kollywood actors, Tollywood actors are not keen into music but if they are willing to do one then they will rock the song with the unmatching energy levels. Here are the list songs recorded by “Pavan Kalyan”
“Mass Maharaja” Raviteja: Tollywood actor “Raviteja” known for his energetic performance on the screen likewise, he chose his playback singing in his movies.
Jr. Ntr: As we all know, Young tiger is a great dancer as well as a singer too. He sang a couple of songs under the musical composition of SS Thaman and Devi Sri Prasad.
Nithin: Tollywood hero Nithin sang two songs in his films “Ishq” and “Gunde Jaari Gallanthayyinde” under the direction of Anup Rubens in the year 2012 and 2013 respectively.
Vijay Devarakonda: Tollywood crazy star  “Vijay Devarakonda” tried his voice in singing in “Geetha Govindam” under the music direction of Gopisunder. He sang the track called “What the ….What the life” which got a tremendous response from the audience.
Nikhil Siddharth: Actor Nikhil  Siddharth did playback singing for his comeback film “Swamy RA RA” under the music composition of “MR Sunny”. He sang “Yo-Yo Memantha Yo-Yo” along with heroine Swathy Reddy.
Nara Rohit: “Banam” movie fame “Nara Rohit” did playback singing only for one track called “Theenmar” composed by Music director “Shravan” for his film “Savithri” starring “Nara Rohit, Nanditha” directed by “Pavan Sadineni”
Akkineni Akhil: “Sisindri” fame “Akkineni Akhil” the son of  “Akkineni Nagarjuna” did playback singing for his second movie “Hello”  directed by “Vikram K Kumar”. He crooned “Yevevo” song composed by “Anup Rubens”
Sandeep Kishan: Tollywood young hero “Sandeep Kishan” crooned for the Telugu dubbed Tamil movie “Idega Aasapaddav” starring “Swathi Reddy, Vijay Sethupathi” in the year 2014.

As per our knowledge, we furnished the list of South Indian actors in male as playback singers. Kindly comment if you think we forget to mention any hero in the article.
Keep visiting our website for more interesting and informative updates..