Skip to content
Pourudu Telugu Full Movie HD: Pourudu (2018) is a Telugu version of Jayam Ravi’s Tamil film “Nimirndhu Nil”. The films was also made simultaneously in Telugu with Nani, titled as “Janda Pai Kapiraju”. However, the Tamil version is again dubbed and released into Telugu in 2018. Both Nani’s Janda Pai Kapiraju and Jayam Ravi’s Porudu did well at Box Office. 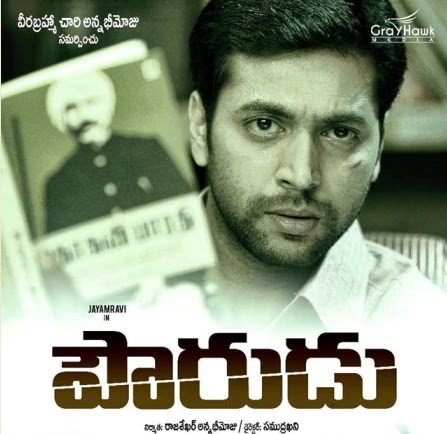 The film stars Jayam Ravi, Amala Paul, Sarath Kumar, Ragini Dwivedi, Soori, Nassar and others in lead roles. The movie is directed by Tamil famous filmmaker Samuthirakani while produced by K Sreenivasan in Tamil and Rajasekhar Annabhimoju in Telugu. If you are searching for Janda Pai Kapiraju Telugu Full Movie HD, then you can watch the Porudu (2018) version. Since, both the stories are similar and made at same time in Telugu and Tamil.

Porudu is an Action Drama film with an IMDB movie rating of 5.9/10. If you are searching for one of the full fledged message oriented movie in Telugu, then you should not miss Janda Pai Kapiraju, The telugu version of Jayam Ravi.

Aravind (Jayam Ravi) is an honest young man who opposes injustice and corruption. He does everything he can to do good for society and often sends corrupt people behind bars. One day, he decides to meet with corruption in government offices and collects key evidence against a minister and a few other officers. He also files a case and manages to reveal the corruption. Upset by this, the evil minister decides to counterattack and presents the look of Aravind, Maya Kannan. The rest of the story is how Aravind manages to handle all of his problems and get the corrupt behind bars.