Skip to content
Mani Ratnam Telugu Movies List: Mani Ratnam is one of the Ace directors in India at present. He has done many Super Hit Films and Blockbusters. Moreover, He is well known for his films with a strong Musical Romantic and Indian Drama genres which has cleared the boundaries between parallel cinema and commercial cinema in Kollywood. His first film is Pallavi Anu Pallavi (1987) but he got tremendous fan following and cult status through Nayakan (1987). Following this, he made many Super Hits and Blockbusters like Geethanjali (1989), Dalapathi (1991), Roja (1992), Bombay (1995), Dil Se (1998), Sakhi (2000), etc. 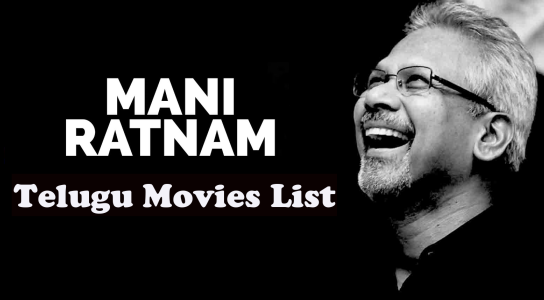 India’s most influential filmmaker Maniratnam’s real name is Gopala Ratnam Subramaniam (born 02nd June, 1956). He works mainly in Tamil Cinema and his movies are eventually dubbed into Telugu and other regional languages. Mani Ratnam is known for revolutionizing the Tamil film industry and changing the profile of Indian cinema which took him a cult status. His films are widely known for their originality, technical finesse and the craft. The Indian government paid tribute to Padma Shri in 2002 for his contribution to the Indian Cinema.