Skip to content
Himsinche 23va Raju Pulikesi Telugu Full Movie HD: This out and out comedy movie features Vadivelu, Nasser and Mounika in lead roles. Vadivelu plays a dual role in the movie in two variations. India’s famous director Shankar has produced this film in Tamil and later dubbed into Telugu and here it is produced by NV Prasad and Paras Jain while the movie is directed by Shimbu Devan. The movie is declared as a Box Office hit by Telugu and Tamil audience. Shankar has compared Vadivelu with the famous Charlie Chaplin for his outstanding comedy in Himsinche 23va Raju Pulikesi. 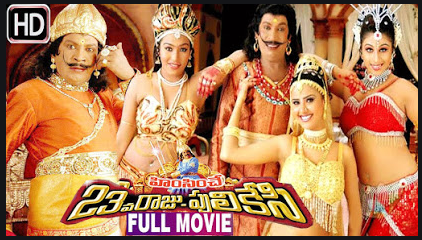 The story takes place against the 17th century. Manivarma is the king of Tamil Nadu. After 22 miscarriages, the queen finally gives birth to twins. Raja sees the crown of Guru and his uncle (Nasser). He therefore lied to the king that only one child was born. He sends the other child away. Because the baby was born during the 23rd attempt to visit the Pulakesi temple, the baby was named Pulakesi, the 23rd king. The royal master seeks to raise Pulakesi with an evil spirit. After Pulakesi becomes king, he begins to harass everyone around him. The other twin grew up in a place far from the common man. He was a wise man and had a lot of patriotism. After graduating, Bhargava realizes that he is like a king. He changes places with the king. The rest of the story tells of how he taught Raja Guru and the British.