Skip to content
Best Film Making Institutes in India: India is the only country in the world which is famous for both Cinema and Cricket. Here people love watching movies, discussing about movies, film making, etc. Entertainment Industry (Movies, Television, Radio, etc) has a large scope in India. Also, 5 among every 100 people in India likes to relate themselves to movie industry. However, who don’t wants to become a film celebrity.

Indian film Industry needs new talented actors, writers, story tellers and film makers in various crafts. But, most of the enthusiastic people are not aware How to start their career in films?. The only suggestion to these people is to start learning about film making by choosing your favorite course in Film Schools and Institutes. 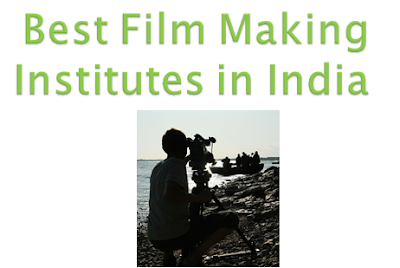 Film Making Courses in India has a huge demand nowadays. People are searching for the best institutes and film schools. Here you can find the best Institutes and the courses offered by those Institutes. So, check the below sections to know about the Direction, Acting, Cinematography, Editing, Production courses for young and enthusiastic film makers.

Film institutes offers training in various technical aspects of film production such as directing, script writing, role playing, makeup, art direction, cinematography, editing, sound, animation and visual effects. These courses generally range from 3 months to 2 years. Most of the people recommend 2 year courses. Since, there will be a lot of scope to gain knowledge on technical skills.

Film & Television Institute of India, Pune is the famous institute for all types of courses in 24 crafts. If you are very enthusiastic about film making, then you should know about the various courses and its importance in the making of a film. Candidates should have a specific eligibility criteria to apply for the film courses in Pune Film Institute. You can get to know the latest admissions using the following link.

Similarly, there are various private institutes to learn any of the 24 crafts in film making. You can observe a lot of institutes and separate courses in the cities like Chennai, Mumbai and Hyderabad. So, go through the list of well known Institutes available below.

In this section, You can find the best film making Institutes in India. So, check the list of Institutes names below. However, candidates are advised to check the offering courses, course fee and reviews before taking the admission in to private film schools

If you know the best film schools in India, please comment below and help others.