Skip to content
As we all know, new scripts and new stories has increased from the last few years in India. Also, the Indian film audience are expecting new stories and new action scenes from film makers which is leading to big-budget movies. Moreover, the regional language films from Telugu, Tamil, Kannada movie industry are getting tremendous response from north India (Bollywood) audience. This is one of the main reason of for market expansion and high budget movies. 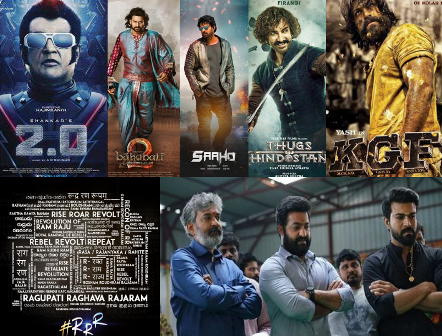 Big Budget movies in India was started from Tamil Cinema, Enthiran. This movie was made with a budget of Rs.150 crores. Also, This movies was a big success at Indian Box office. Following this, Telugu movie Bahubali series was made on 400 crores. Similarly, Bollywood movies like Dhoom Series, Krish Series and Sandalwood movies like KGF are made with high budget. Moreover, Most of these high budget movies has got huge success at Indian Box Office.

2019 is the big year for Indian film makers. Since, most expensive movies like Robo 2.O, KGF, Saaho, Sye Raa are releasing this year. And, Rajamouli’s RRR is getting ready for pongal 2020. Also, Telugu producer Allu Aravind has announced Ramayana with PAN Indian stars in all languages (Hindi, Telugu, Tamil, Kannada, Malayalam, and other Indian languages). So, we can expect more expensive movies from Indian film producers in the coming days.

Here we has listed high budget movies in India till 2019-2020. So, Take a look at the 10 biggest Indian movies according to their budget. The list contains movies already out and coming.

10 Most Expensive Movies in India